The Tenor Guitar is completed and it's everything we hoped it would be.  The tone is deep and rich and the sustain and resonance are very "Kinnard" like.  Check out the sound sample....

Strings are installed and the action set up....checking out the playability.  Next up- the tenor uke

Neck is glued up on the tenor uke

The bridge has been glued onto the body and the tenor guitar is ready for the strings and the set up.... 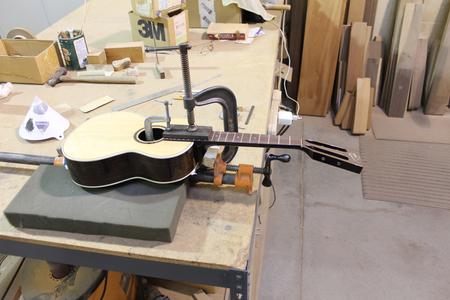 Specs for the Kinnard Tenor Guitar and Tenor Uke are as follows:

East Indian Rosewood back and sides

MOP fretboard markers and side markers

Finish is the most difficult part of any build

Final wet sanding of the tenor uke top prior to buffing 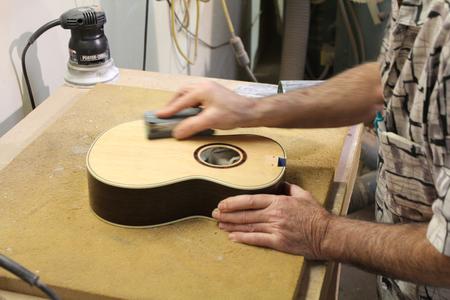 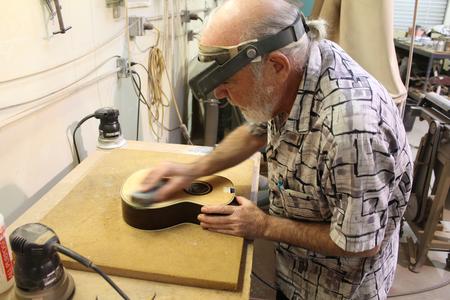 Checking to make sure everything looks good

Clamping the neck to the body 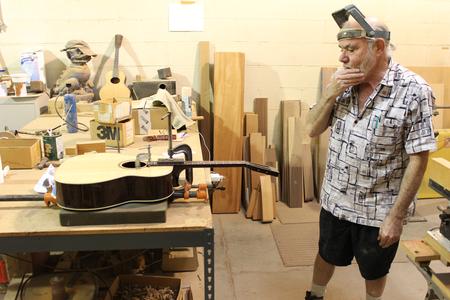 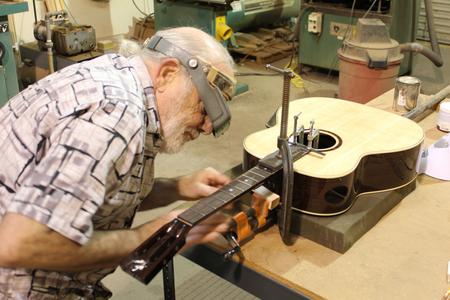 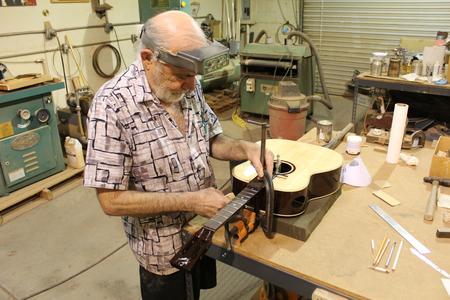 Assembling the neck onto the body

Final inspection of the neck prior to gluing

Nitro Cellulose lacquer finish has been built up, dried for approximately two weeks, and buffed to a high gloss. The guitar is now ready for the neck. 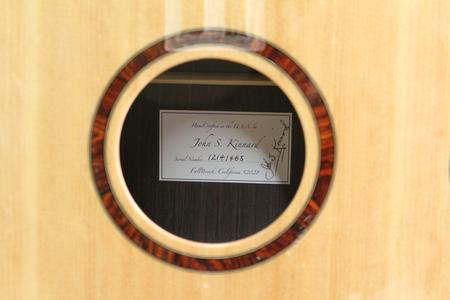 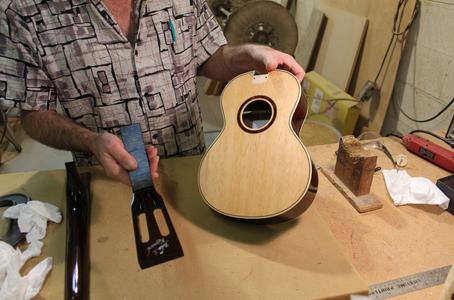 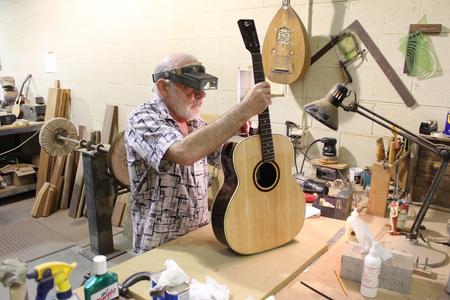 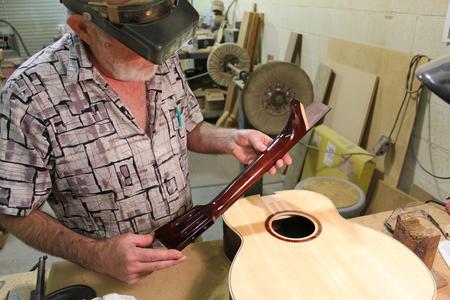 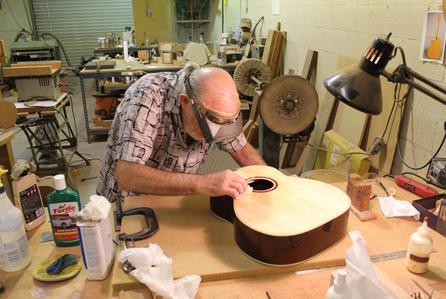 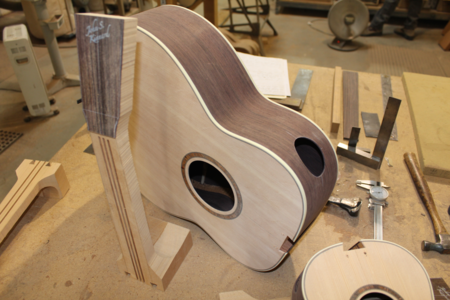 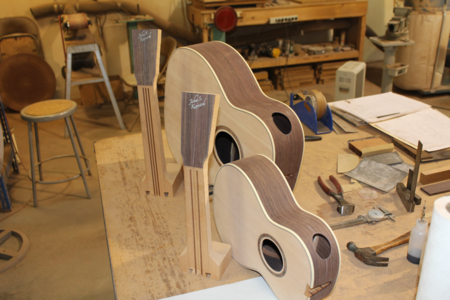 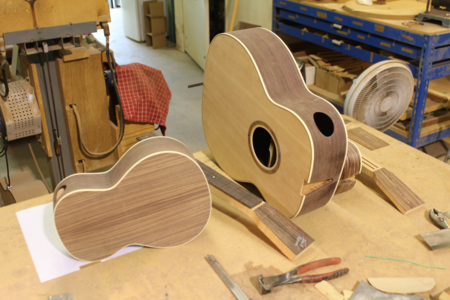 Close-up of the beautiful Cocobolo rosette in radial pattern

You have heard of the "Three Tenors"?  Well this is the "two" tenors 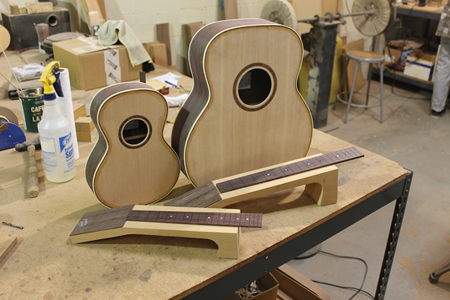 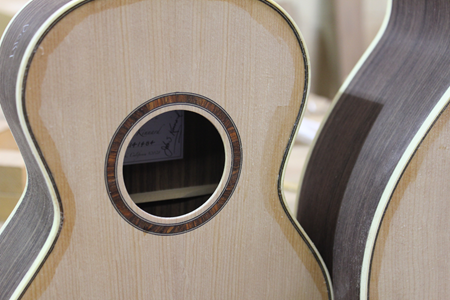 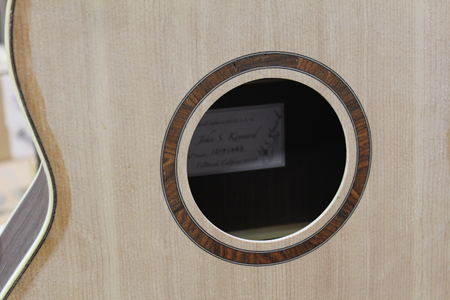 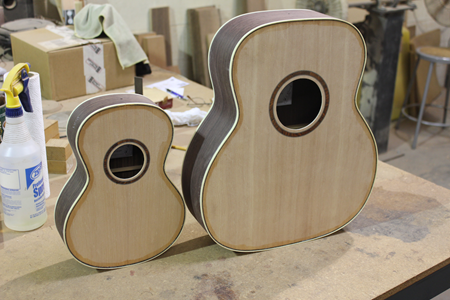 Body's built and ready for binding 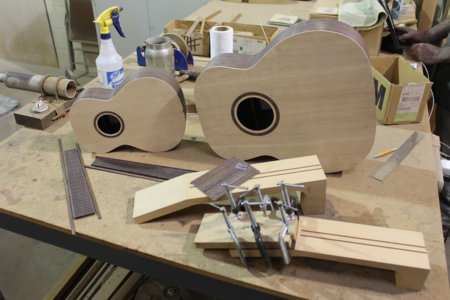 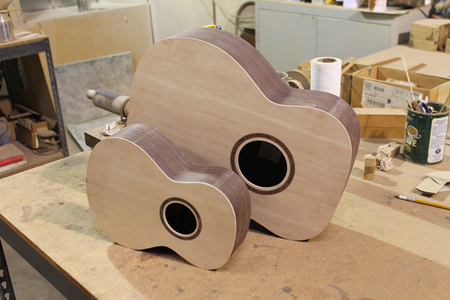 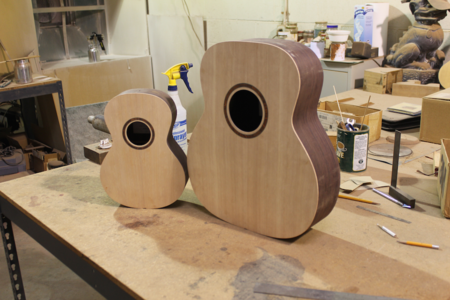 Back transverse braces being fitted out

Tenor Guitar top during installation of the X-bracing.  Transverse braces were added to complete the top bracing

Tenor Uke with Sitka top and East Indian Rosewood back 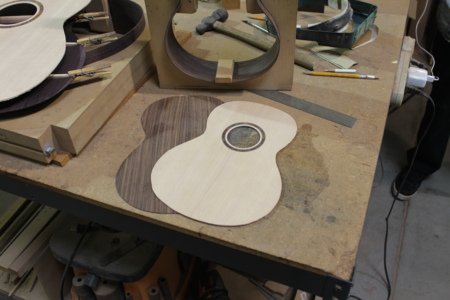 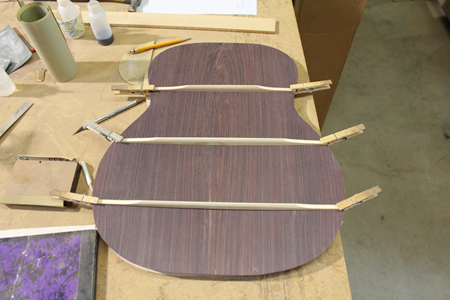 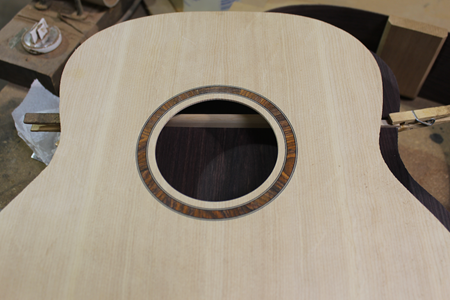 The John S. Kinnard "Tenor/Tenor" is a special two instrument collector set consisting of a tenor ukulele with a matching tenor guitar.  The idea behind this concept is simply this- there are a lot of ukulele players that come from a guitar background but there are far fewer players that come to guitar from a uke background.  There are a number of reasons for this but probably the biggest is that a typical guitar has six strings instead of the four strings found on a uke.

If you wanted the tone and sound of a steel string folk guitar it meant that you had to learn all new chord fingerings for six strings. For this reason alone, rarely do uke players make the transition to guitar.  It doesn't mean uke players don't want or aspire to play guitar, it is just that it seems out of reach to most people because of the time and effort required to learn a new instrument.  The good news is that there is a way to play all the uke songs you already know on a guitar and play them using the exact same fingerings you use on your tenor uke.  It's called the "Tenor Guitar"!

The four string tenor guitar was introduced in the late 1920's as an alternative instrument for four string plectrum banjo players. The later part of the the 1920's saw modern music transition to a jazz based sound and professional banjo players found themselves out of a job because there was no place for the banjo sound in the new style band orchestra.  Thus, the birth of the "tenor" guitar.  It had the same number of strings as the banjo and the strings were tuned to the same intervals so those banjo players now began to play "guitar" to fit into this new style music.

These strings could also be tuned to intervals that just happen to be the same as a ukulele.  This tuning is referred to as "guitar tuning", "Chicago tuning" or "baritone tuning".  A tenor guitar can be tuned to DGBE and use the exact same fingerings as any size uke!  So like banjo players in the past uke players can easily transition to the guitar!

We will be offering this matching collectors set and also individual tenor guitars on custom order.  Follow John as he builds this set and let us know if you have any questions....

Tenor/Tenor is complete and ready to go.

Next Page
View on Mobile