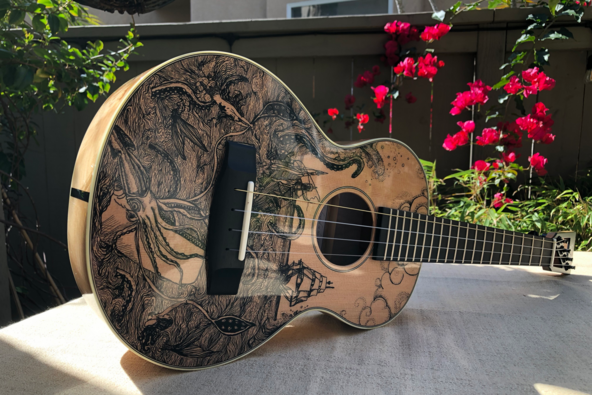 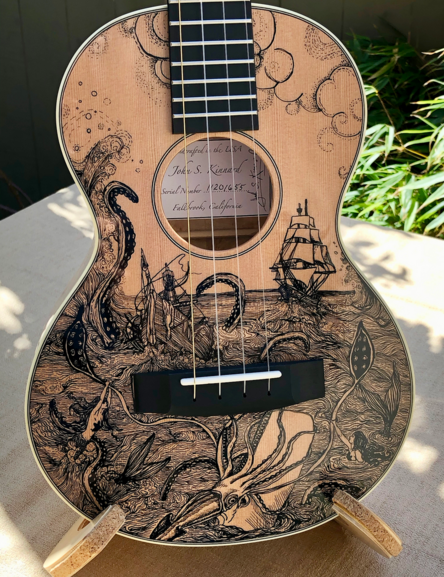 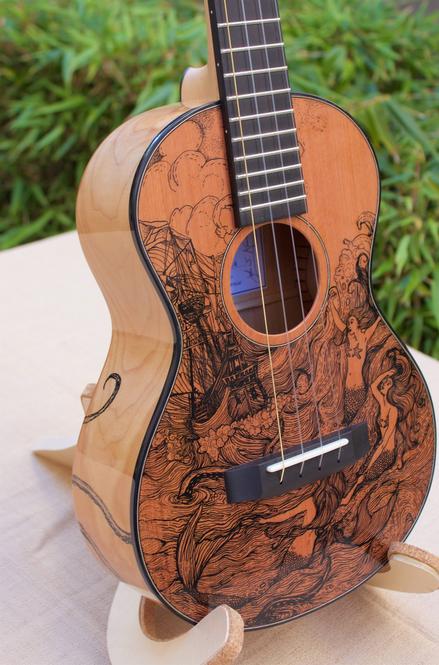 "War of the Titans", depicts an epic battle between 18th century whalers and the titans of the seas.  The scene shows the hunters becoming the hunted as a Kraken attacks the whalers boat from below while a giant squid steals their prized prey, the mythical white whale.  The back shows a mermaid with one of the sailors in her embrace whispering for him to relax- the viewer decides whether she is taking him to the surface or to the bottom....

Lily continued working in a black ink format on this final uke in the Mermaid Series.  Her attention to detail and the overall feel of the scene was really captured using the black ink scrimshaw style.  The woods used on this project were highly figured Maple back and sides with a western red cedar top.  It's got a warm balanced tone with the Kinnard sparkle and resonance. 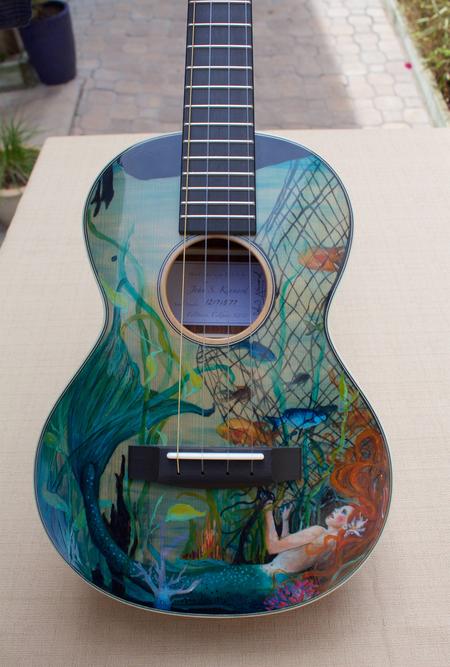 A "Sailor's Nightmare" depicts a dark, dream-like seascape showing a giant Kraken slowly working it's way towards an unsuspecting sailing ship.  Mermaids gather around, consoling each other knowing the fate that awaits the sailors on board the vessel.

​This is a wonderfully intricate "black ink on wood" drawing by Lily that is reminesent of old style scrimshaw or tattoo art.  The nightmare scene depicted is spectacular in its intricate detail as it draws your eyes into the story.  The Kraken on the back appears to reach through the instrument by way of the sides as its tentacles emerge from the surface of the ocean.  This is truly a spectacular example of playable art between the collaboration of these two artists.

"The Great Escape" shows a beautiful red haired mermaid working frantically to save the lives of fish trapped in a net while the dark shadow of the boat hovers on the surface directly above.  This beautiful tenor uses Palo Escrito for the back and sides with a Western Red Cedar top.  It has an Ebony bridge, fret board and faceplate and has a side sound port to bring the sound up to the player.  This is number three of five in the Mermaid Series and is destined to be a collectors item.  Lily continues to show off her amazing artistic talent not only with the beauty of her art work but with creative narrative that each of these instruments represents- they truly are playable art.

​Polaris is the “North star” and has been used throughout history to guide sailors on their journeys in the Northern hemisphere.  The pearlescent bubbles in the scene represent stars in the night sky and the mermaid is floating motionless and calling out to sailors to “come this way….”.

Bio:
I grew up in the outskirts of San Diego, on Lake Hodges. My father is a shipwright and my mother, a middle school teacher. I have a younger sister, who is a bit of an Amazon – despite her attitude when she’s around her cats.

I did my undergraduate at Sonoma State University, attaining my BFA in printmaking under the direction of Kurt Kemp, Mark Perlman and Jane Fisher. After taking some time to build my practice, I was accepted into the Printmaking Department of The Royal College of Art in London, England where I received my MFA under Jo Stockham and Mark Hampson. It was while I was in England that I began to become much more engaged with my work in an academic environment; it began to take off in a direction that was an ally to my own self – where I could utilize my skills as printmaker/painter in tandem with how I saw the world.

Materially, I’m a bit of a magpie – collecting things that I like. The craft of my work engages the history of American craft, using it to celebrate the construction and complexity of the female. I gather the images and objects that I am attracted to and create an environment that my work is created out of. Then, I make intuitive conclusions that I later deconstruct. I was trained in the traditional techniques of Printmaking and Painting --- which has evolved into making small sculptural pieces using butterflies, moths and found imagery while maintaining my fundamental skills in the traditional mediums. Being a Printmaker is important to me. It allows me use my strengths of being methodical and detailed oriented to create structure. I’ve learned it’s not just a medium of how to make work, but a process that allows you to develop your practice outside the lines.

Number one in the series is called "Siren of the Sea" and depicts a Mermaid plucking the strings of the uke as an audience begins to build....  It is constructed using Brazilian Lacewood for the back and sides and a Sitka Spruce top.  It has a Mahogany neck, Rosewood fingerboard and bridge and a Lacewood faceplate with gold UPT tuning machines.

"Siren of the Sea" 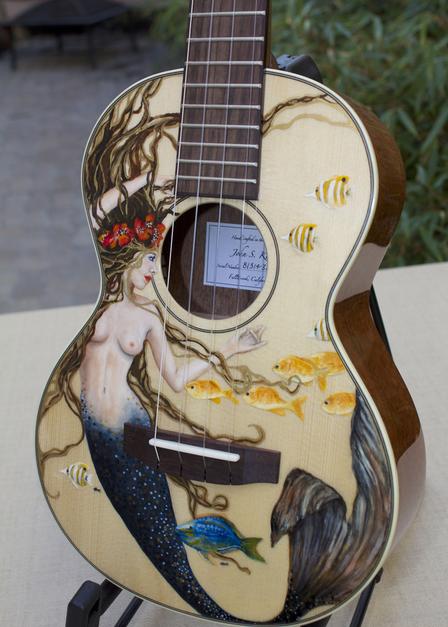 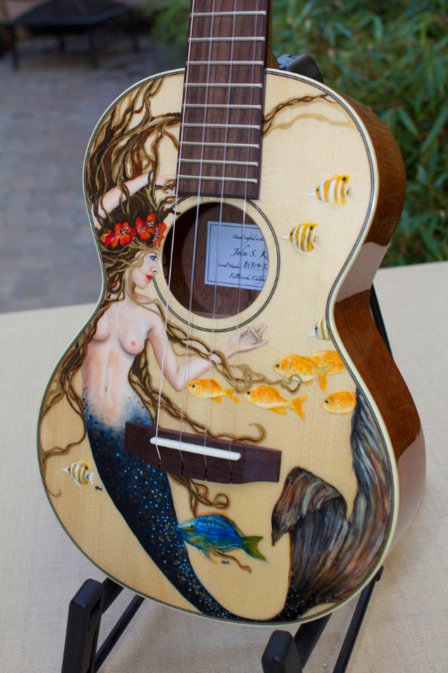 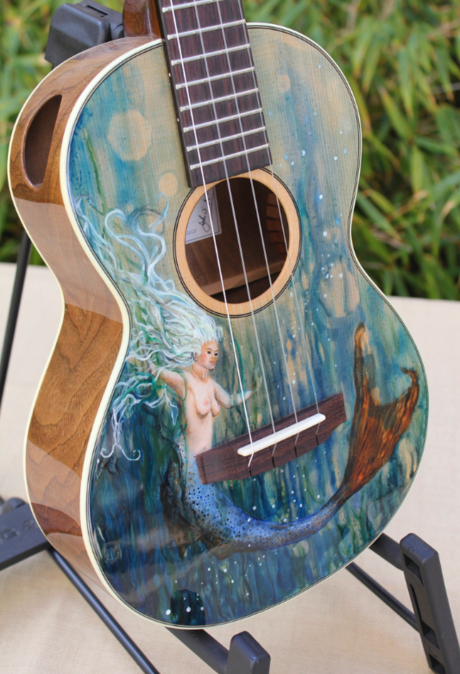 Lily wanted to create something different on the second of the series.  With the gloss finish it gives the illusion of being “underwater” with not only the pearlescent bubbles but also the texture and application of the enamel paints.  Look in the upper bout and you see a hexagon and larger circles that give the illusion of looking through a prism.  Her hair is floating above her head and gives the illusion of seaweed moving with the rhythm of the current…..This uke is constructed with Claro Walnut back and sides with a Western Red Cedar top, a Walnut neck, East Indian Rosewood fingerboard, faceplate and bridge and incorporates a custom sound port.  Black Gotoh UPT tuners along with a bone nut and saddle complete the package. 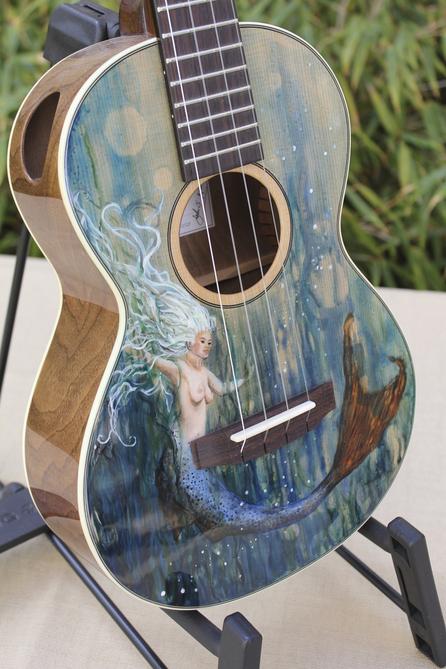 The Mermaid Collection is a compilation of five very special ukuleles that took 7 years to complete.   Each individual instrument carried a mermaid theme and is unique, not only by the original artwork of Lily's, but also by the woods and appointments used by John in their construction.  This collaboration between the two artists and the synergism and connection that resulted between them, makes this series truly original and very special.​

"War of The Titans" 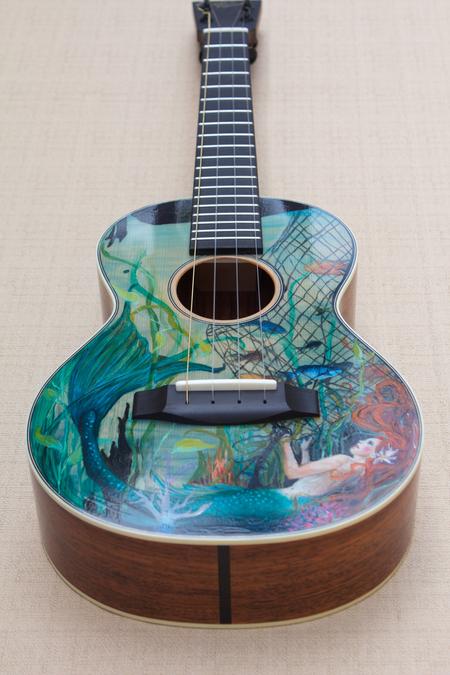 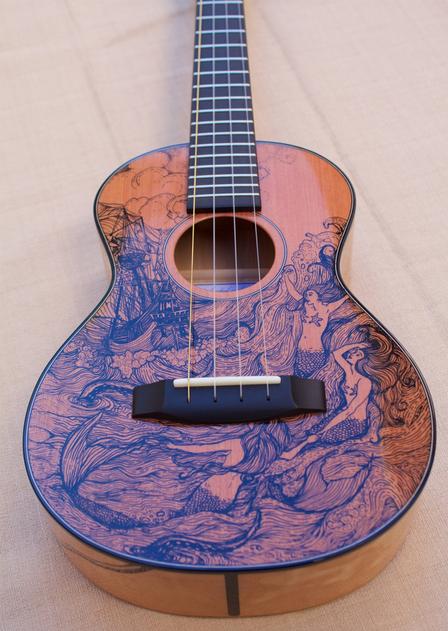