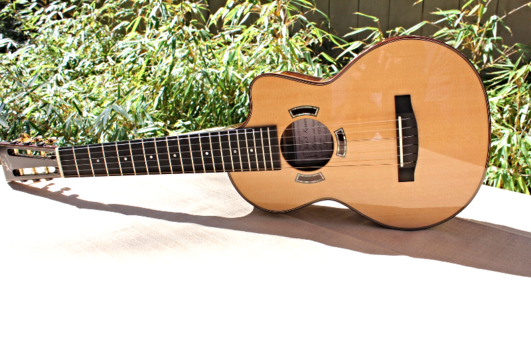 The Kīkū is completed and truly is a stunning instrument.  The Gotoh "Stealth" tuners allow the headstock to be lighter and the instrument is well balanced to hold.  It looks amazing, plays like butter and sounds like heaven.....This I believe, could be the ultimate travel guitar.

The body has been assembled and the top and back plate routed along the sides to get the cut away.  Here John uses the hot iron to heat the solid wood purfling to shape so it conforms to the lines of the body.  He then glues the purfling into the channel cut around the edges of the body.  This is where very detailed work comes into play as the miters in the purfling are cut out to produce exacting corners- takes a lot of time and where John's mastery really comes into play.  After this step, the Rosewood bindings will be installed using the same method of heating and shaping the wood.

After the body is "kerfed" it is sanded down using a sanding table and beveled disc.  Kerfing is used as a gluing surface for the top and back plates.  On a Kinnard the top and back have a built in arch that adds to the strength of the body.  This allows for lighter bracing while maintaining the needed strength.  The sanding disk not only sands the kerfing flush with the sides, it also puts the correct angle to get a flush fit with the back and top.  These little steps all go towards building to very tight tolerances.

​The Stika top has been cut out and the custom rosette inlayed.  We wanted to do something very "tricked out"​ on the Kīkū so John is using his artistry to create something special.  The fingerboard has been made and the MOP fret markers installed.  The neck will be 1-7/8" at the nut.  You'll notice the top and back are not cut out for the cut-away yet.  This is done after they are assembled onto the sides and the excess routed away.
​

Progress on the Kīkū....Sound hole has been cut out and the back and top cut to shape.  The sides are in the mold and you can see the cut away shape.  The neck has been glued up and the Rosewood fingerboard prepared with the MOP fret markers.

The Sitka spruce top is book matched and run through the edge planer to create a glue joint.  This joint is critical to the integrity and strength of the top.  Once the edges fit up completely flush they are placed in a jig to join the two sides together.  Glue is applied to both edges and they are clamped together with enough pressure to join them as one.  Depending on the temperature, the top plate is left in the jig for about an hour and after drying completely the glue joint will actually be stronger than the wood itself.

Here you can see the neck blank cut out.  The neck is constructed of a two piece "board" matched set that uses the opposing grain of the wood to help create a very stable and strong neck.  Board matched is different than "book" matched in that it is two pieces cut "end to end", folded up and joined together.  Book matched is cut side to side, opened like pages of a book and then glued along the two common edges.

The neck blank was cut out of Honduran Mahogany and the Ebony selected for the fretboard. 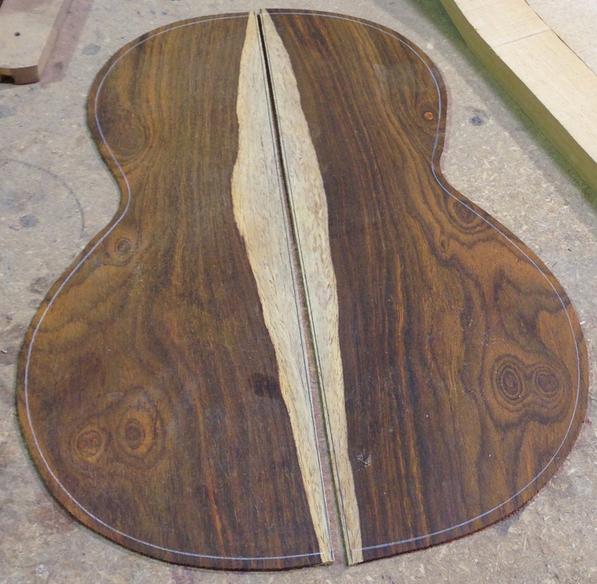 Here you see John cutting out the back plate.  He drew out each side and matched up the grain pattern so they were as symmetrical as possible given the wild grain patterns found in Cocobolo.  In addition, he planned out the amount of sapwood for the back to go with the sapwood pattern on the sides.  As mentioned, this is where the creativity comes into play.

​Specs for the Kīkū are as follows:

Baritone size body with cut away and soundport

Cocobolo (w/ sapwood) back and sides

Mahogany neck with a slotted headstock and Gotoh "Stealth" tuners

MOP fretboard and side markers

John is laying out the sides of the cocobolo.  He will be incorporating sapwood into the design so you will see it not only on the sides but also on the back.  "Grabbing" or planning out how much of the sapwood will be on the sides is where the artistic sensibilities of the luthier come into play.  It should be proportional to the amount of sapwood on the back so the sides add to and not detract from the beauty of the back plate.

The body has been paste filled and the base coats of the 2 part lacquer applied.  You can see the color of the Cocobolo really start to "pop".  These base coats are built up using the two part varnish and leveled.  The final coats are nitro cellulose lacquer which buffs out and finishes really nicely.  The neck is finished separately from the body and assembled during final.  The joint you see on a Kinnard between the neck and the body is a "mechanical" joint- it is such a tight fit that it gives the appearance of being finished as one piece.

​The Rosewood binding and series 3 purfling have been installed and really sets off the Cocobolo and Sitka Spruce.  The neck is joined to the body before it's final shaping.  This neck heel joint is carved to match the shape and contours of the body. When the joint looks good to John with his 5X jewelers glasses, you see a flawless connection between the neck and body with the naked eye. This is one of the marks of John's workmanship and highlights his 40+ years experience as a luthier.

The​ Kīkū is finaled and strung up with Southcoast Kīkū strings.  Strings 1- 4 are at the same pitch as a guitar and strings 5 and 6 are an octave higher.  This gives a full rich sound without the bass strings being too floppy.  The Kīkū was strung up and allowed to sit for a few days and then John did a final set up of the action.  It plays very smooth and the 1-7/8" nut feels good in the hand....

The final coats of nitro cellulose lacquer have been applied and the finish looks almost 3D.  Just wait till the body gets buffed out- it's going to look amazing....  The neck on this instrument will be satin so buffing will not be required...