The slotted headstock on a Kinnard ukulele gives it not only a unique look, but also adds what we call a little "sup'm sup'm" to the tone of the instrument.  That's the technical term we use to describe the tonal differences between a slotted and a paddle type headstock.  It's a little bit of "airiness" and perhaps a little more resonance or sustain... we can't quite put our finger on what it is.  It's just a little "sup'm sup'm" that can't be quantified, yet we believe can be heard.

As good as they look, some people would never consider owning a slotted headstock because they are intimidated by the perceived complexity of the re-stringing process .  Let me say right up front- "stringing up a slotted headstock is no more difficult than stringing up a paddle style headstock".  It's different, but the process is not any harder and after reading this I hope you agree.  My goal in writing this article is that when it comes time to order that custom Kinnard and you really like the look of the slot-head, you will have the knowledge and confidence to "go for it" because you will no longer be intimidated by the re-stringing process.  So lets get started....

So that's it! You now know all you need to know about restringing a Kinnard slotted headstock.  Is it the only way to re-string a slot-head?  Absolutely not!  But it's how we string our slot-heads and we find it works well for us.   Follow these simple instructions and with a little practice you should have no trouble restringing a slot-head.  Just remember the basic rules:

​Rule #1-  Always thread the string into the post hole from the top.

Rule #2-  Always start with the first and fourth string followed by the second and third.

​Rule #3-  Always try to make the string wraps to the inside of the mounting hole for strings 1 & 4.

Slotted headstocks really can add to the looks of your Kinnard custom uke.  Knowing that they're no more difficult to re-string than a standard paddle headstock can put your mind at ease and give you an added choice when selecting the options for your new custom Kinnard ukulele.  You too just might want to hear that little "sup'm sup'm".

Once the knot is firmly inserted into the slot you can now cut the string to the appropriate length.  Simply extend the string about 2-3" past the post that you're attaching it to and cut it.  This way you have plenty of string to comfortably wrap around the post without excess length to get in the way.

Figure 1.  String is tied into a "figure 8" knot and cinched up tight.  It's then trimmed and inserted into the string slot.

Prepare the strings for installation-

Remove the strings from the package and lay them out in order from 1 through 4.   Prior to installing each individual string, a knot has to be tied in the end that anchors it to the bridge and the string needs to be cut to length.

​​Figure 1 shows how to tie a "figure 8" knot- this is simple to tie and will not slip when tied correctly.  Cinch it up tight using needle nose pliers and then trim it so it leaves a short little pigtail.  This will help you the next time you change your strings as it will give you something to grab onto when you remove the knot from the bridge slot.  Lay a piece of heavy paper on the top to prevent the string end from scratching the finish and insert the knot into the bridge.

Figure 9.  Excess string prior to trimming 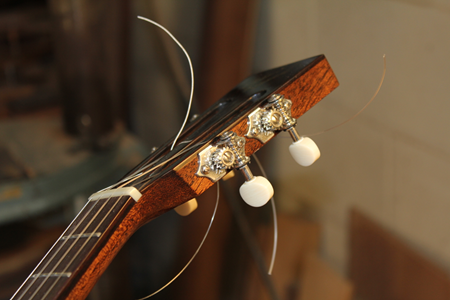 Once all the strings are installed your headstock should look something like a "bad hair" day as shown in Figure 9.  It's now just a matter of cutting the excess string leaving about a 1/4" tag above the post as shown in Figure 10.

Figure 8.  The two inside strings are installed using the same process as the two outer strings

It's now time to install the inner 2nd and 3rd strings.  It's done exactly the same way as the 1st and 4th string as shown in Figure 8.

Figure 7.  Strings 1 & 4 now installed with wraps guided between mounting hole and the center side of the slot 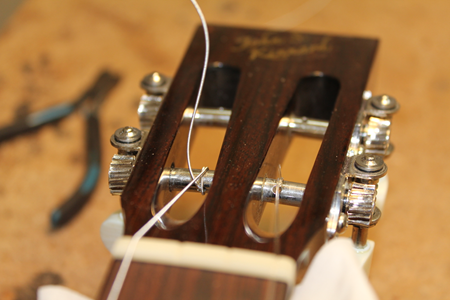 We now go to the other outside string and install it following the same process as the first string.  Over the post, down the post hole, back towards the fingerboard and back up the slot to the top as shown in Figure 6.  Again, try to guide the string wraps to the inside of the mounting holes as shown in Figure 7.

Rule #3-   Always try to make the string wraps to the inside of the mounting hole for strings 1 & 4.

Figure 5.  String wraps should be guided to the inside of the mounting hole for the two outside strings to prevent touching the edges of the slot

As the tuner post rotates and the string gets multiple wraps around the post, try to guide the "wraps" of the string between the post hole and the center of the headstock, as shown in Figure 5.    This is primarily done for the two outside strings to prevent interference or touching of the wooden edges of the slots.  Not an issue with a Kinnard but something to be aware of as it can happen with some other slotted headstocks. This step is also not usually needed on the two inside strings as interference with the slot edges is unlikely.

Figure 4.  Feed string back towards the fingerboard, around the post, back up to the top and tie off with a simple overhand knot

Figure 3.  String goes over the post and down through the mounting hole.  Start with either of the two outside strings (1 or 4) followed by either of the inner strings (2 or3) 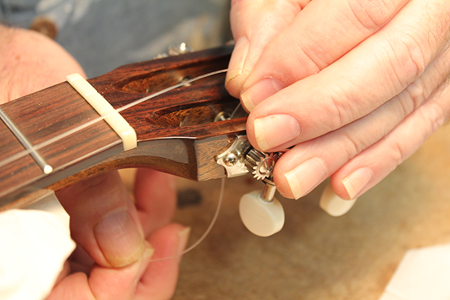 RULE #1-  Always thread the string into the post hole from the top down.

Line up the tuning post so that the string hole is pointed upwards and leans slightly towards the top of the headstock, as shown in Figure 2.  This is important because the strings are ALL going to be threaded over the post and down through the hole from the top.  At NO TIME should you ever feed the string up from the bottom hole or from the back of the headstock.

RULE #2-  Always start with the outside strings first and then install the inside strings.

Figure 2.  String hole pointed upwards and slightly towards the top 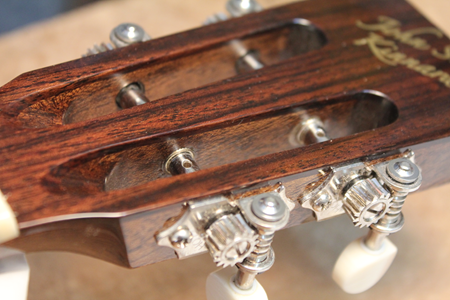 Remove the old strings and wipe down your uke with a damp cloth.  Shine up the posts of the tuners and wipe down the fingerboard to remove any built up dirt or grime that has accumulated from the hours of playing time.  While all the strings are off this might also be a good time to refresh the fingerboard by taking a drop or two of lemon oil or fretboard conditioner and wiping it down using a soft cloth- (an old KinnardUkes tee shirt works good for this)!  Just be sure to use only a drop or two as a little lemon oil really does go a long way.  Wipe the fingerboard down until the wood color deepens and is completely dry to the touch.  It's now time to begin the restringing process....

How to String a Kinnard Slot-head Ukulele