Introducing the new John S. Kinnard, "Luthier's Reserve Series".  This new model will incorporate design features that make it one of a kind and very special as no two are planned to be alike. This is John stepping "outside the box" and using his artistic sensibilities and skills as a luthier to create something that shows off his creative vision of the ukulele as an object of playable art.

John's ukuleles have been described by some as "understated elegance".  This is the first in the "Luthier's Reserve" series and definitely shows that aspect of John's work.  As good as it looks, it sounds even better! Deep resonance, a rich, thick tone with sustain that goes on and on...this tenor is destined to be a collector's item.

This uke uses a torrified Sitka top and while it has been used on guitars in the recent past,  I don't believe I have ever seen one used on a uke.  Torrification is a process of "aging" the wood to simulate a top that is fifty or sixty years old.  There are a number of different processes but basically the wood is placed in an oxygen free oven and "baked" for a certain amount of time.  This drys out the moisture down to the cellular level and converts the sugars and cellulose in a way that mimics a spruce top that has been on an instrument for a very long time.  Many guitar builders looking for that Martin pre-war tone are incorporating the torrified tops in their builds and for a good reason.  To say we are pleased with the sound would be an understatement.

In 2016 we introduced the Kinnard Z-stock at the Ukulele Guild of Hawaii show in Honolulu.  The custom "one off" headstock design was very well received and soon 90% of our custom orders requested the Z-stock headstock.  It quickly became the "face" of KinnardUkes and recognizable around the world by the ukulele community.  The "Luthier's Reserve V" celebrates the Kinnard Z-Stock and uses the elements of its design in the features of this very special, collectable, baritone ukulele.

We call our "Luthier's Reserve V" a "Stealth Baritone".   It features the looks of a standard 4 string baritone but has an octave 5th string course next to the 4th string.  This is designed to bring out the bass and create a beautiful, balanced and sparkly sound on a string that can tend to get muddy due to the lower pitch of the standard baritone tuning of DGBE.  This 5th string comes out of the same peg hole as the 4th string and once over the nut goes through a tiny hole in the face plate to the back of the headstock where a machine tuner is hidden.   This was designed so that you can play it with the octave course string on or off and the instrument looks the same.  Hence the "Stealth" moniker.  It features the following:

This tenor was inspired by our trip this past summer to the Czech Republic, Vienna and Munich with Kimo Hussey and David Chen.  We had the opportunity to visit a number of amazing cathedrals and they were the inspiration for this tenor we named "Heaven's Door".  Highly figured Padauk was used for the back and sides and master grade Western Red Cedar was used for the top.  Beautiful figured "Tiger" Maple was used for the neck.

The headstock design is what we refer to as the recessed Z-Stock.  An Ebony faceplate was machined down to the figured Maple used for the neck.  This showed off the Z-stock shape but also gave it depth and a 3D look.  This was done by machining down to the Maple instead of all the way through like on our standard Z-Stock.  Gotoh UPT's in brushed aluminum with MOP style buttons complimented the use of MOP in the body and the neck.

The design of the back uses inlayed purfling to give a cathedral effect with Ebony from the binding creating a walkway up to the arched doorway.  The MOP used in the arch gives off a cloud like effect leading to the name "Heavens Door" for this instrument.  The figure in the Padauk represents the art on the ceilings of these great cathedrals and the walkway leading up to the door creates depth and interest-

This cathedral theme was also carried over onto the Padauk fretboard.  The apex of the arches act as fret markers on the 5th, 10th and 15th fret and another arch doorway appears just above the oval soundhole that designates this a "Luthier's Reserve" model along with four inlays at each point of the compass....

The back of the neck shows our "floating" neck inlay in Padauk against the white of the Maple.  It starts from a slightly flared bottom and ends at the Ebony back plate with a small MOP arch that carries on the theme for the instrument.  The bridge was made from the same highly figured Padauk and an Ebony inlay created a unique effect of the strings disappearing into the body.

Like our other Luthier's Reserve's this is an example of John's vision of playable art and is surely destined to be a collector's item. 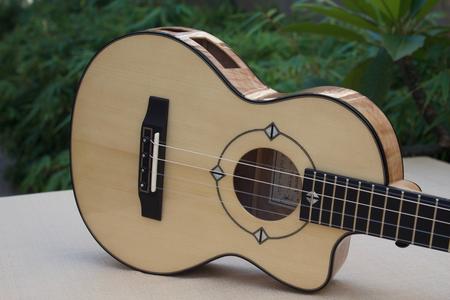 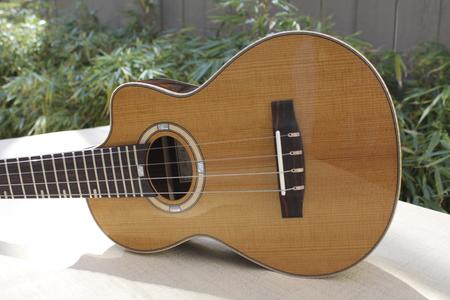 The "Luthier's Reserve" series of Kinnard Ukuleles is a very special group of "one-off" instruments.  They are all different and their unique design features are a culmination of creativity, imagination, inspiration and desire to try out new ideas.   Their design usually results from a natural, organic interaction between John and myself (wine may or may not be involved) where we find ourselves sitting around and exploring the land of "what if...."  There is no schedule or timetable to design and build one of these works of art.  When the time is right and the stars are aligned, it just happens... 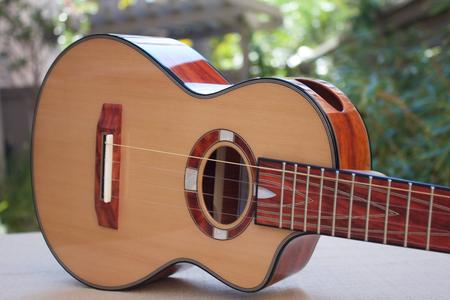 For this project John focused on the woods themselves to create an instrument with visual balance in color, shape and detail.

It's the sum of all these parts that produce an instrument that is visually stunning as a whole yet draws your eyes to the smallest detail- details that showcase John's 47 years of building experience.

Highly figured Claro Walnut was used for the top, back and sides and was accented with Maple on the fingerboard, bridge and headstock.  We went for an "Art Deco" theme by blending sharp angles with softer rounded shapes to create balance.  The darkness of the Walnut was contrasted by the lightness of the Maple to draw the eye to the different parts of the instrument.  The Maple binding and backplate segued into the Walnut body and neck to draw the eye towards the details John integrated into the build.

The sound hole is elliptical in shape and the rosette uses Mother of Pearl in the 3, 6, 9 and 12 o'clock positions to denote it as a "Luthier's Reserve" (our Series 3 builds incorporate markers at the 3, 6 and 9 o'clock position).  Our new Z-Stock headstock catches the eye as we wanted something that was going to be very unique yet understated.  UPT tuners on a center diagonal along with a "see through" design provide a unique yet proportional design that works really well with our body style.  The Walnut neck has a floating center strip with bound Maple that visually picks up the same back strip down to the art deco purfling theme on the back.

The sound?  All Walnut makes for a warm, deep, rich tone and the resonance and sustain that our instruments are known for really accentuate that sound.  Walnut is probably one of our favorite woods for both beauty and tonality. This tenor will truly make a wonderful addition for the discriminating player or collector.

The fourth iteration of our Luthier's Reserve Series celebrates John's 50th anniversary in luthiery.  Starting his building journey in 1969, John built his first instrument, a bow back lute, with wood he found on the beaches in North San Diego County.  Fast forward fifty years and he is building some of the finest ukuleles and guitars in the world.

This ukulele was inspired by the Selmer Maccafferi gypsy jazz guitars that John built for many years through his Dell 'Arte Guitar Company.  It incorporates a "D" style sound hole with the traditional rosette, a Selmer style snakehead slotted headstock and a beautiful mustache style bridge.  The sides are a two piece laminate design using beautiful Padauk on the outside with Maple for the inside.  These two layers are glued together in a vacuum bag process to make the smooth bend in the cutaway area of the body and to create a very light, yet rigid rim to better transfer the energy from the strings to the soundboard.  Because of the Maple being on the inside it tends to pick up the sonic attributes of the Maple creating a wonderfully articulate and loud voice.  With the Torrified Sitka Spruce top this tenor is loud without being brash and is surprisingly warm and very balanced across the strings.

The design appointments for this instrument honor our upcoming trip to the Tokyo Handcrafted Guitar Festival in May of 2019 with the Hawaii Builders Guild.  We chose Padauk for the red coloring and used it to accent the Maple neck by designing a floating inlay with Japanese symbols that read, "Music is Life".  We also used Padauk in the Japanese Torii Gate inlay on the seventh fret of the fingerboard and the mustache bridge to tie every thing together.  A raised relief of a Torii gate on the Ebony backplate of the headstock completes this custom motif. 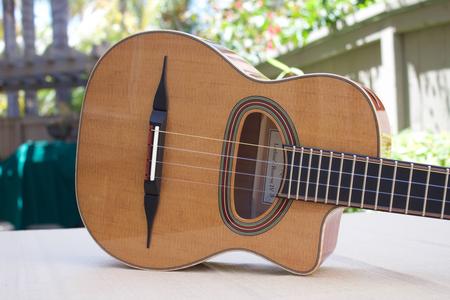